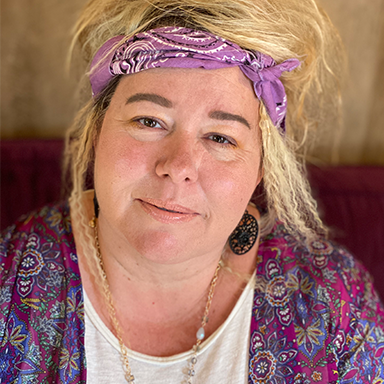 Dolly Parton may not know it, but she was responsible for the first song Alisha Hamilton ever wrote. Born in Marietta, Georgia and raised in Decatur, Tennessee, Alisha was steeped in the Appalachian songs her grandmother sang, the country music her father listened to, and her mother’s 70s pop music. She liked a little bit of everything, but she absolutely idolized Parton.

“I wrote my first song when I was 13,” she says. “I knew how much Dolly liked butterflies, so I wrote a song about a butterfly trying to find its way in the world. It wasn’t very good, but I wish I still had the lyrics.”

Alisha humbly admits she still considers herself a novice, in spite of having cowritten countless ballads about unusual subjects, many of which her award-winning daughter, EmiSunshine, has recorded to critical praise—“Sweet Lilly” (about her grandmother), “90 Miles” (autism), “Jonas Black” (mass violence), “Black Sunday ‘35” (the Dust Bowl) and more.

“It’s pretty incredible to work with somebody for as long as I have Emi,” Alisha says. “She was 5 when she started writing songs, and she’s 16 now. We kind of anticipate where we’re going with a song. When one of us has an idea, the other can open it up. That kind of writing partnership often takes years to create.”

Like most of her songwriting colleagues, Alisha draws inspiration from personal experiences and observations. Her early imagination was sparked by true stories—the good and the bad— that her mother, a journalist, wrote for her hometown newspaper. Later, she shared other people’s tragedies and joys firsthand, while working at a hospital.

“I think being a nurse for 17 years—dealing with death, birth and patients’ families—is a beautiful way of bringing compassion to songwriting,” she says. “I have had experiences that others don’t have.”

As a songwriting team, Alisha and Emi have caught the attention of acclaimed artists and producers in Nashville and beyond, leading them to work with the likes of Jim Lauderdale, Tia Sellers, Darrell Scott, Liz Rose, Tony Brown, and even legendary funkmaster Bootsy Collins! Indeed, Emi and Alisha co-wrote Bootsy’s latest single, “Stars,” on which Emi also sings lead.

“I think working with other songwriters makes me better,” Alisha says. “Everyone brings something unique to the table, and whatever happens in that room will never happen again, in exactly that way. Wrensong Entertainment and Anthem Entertainment are the gold standard, and I am honored to be signed with them.”