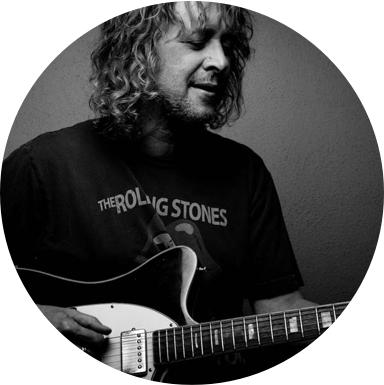 Jim Huff is a former A&M recording Artist and Multi Platinum Songwriter/Producer/Guitarist and Composer for Film and Television.

As a Producer and Songwriter, Jim has numerous Platinum and Gold awards across various genre's of music including his #1 Billboard record with Joe Bonamassa and has had many top 5 singles at radio over the years.

In his early 20's Huff was signed to Rondor Music publishing which eventually lead to him being signed as an artist to A&M records. A few years later it was the head of A&R at the label that offered Jim his 1st producing gig for a new act they had signed.

Recently Huff developed co-wrote, produced and played guitars on the debut EP for southern girl "Donica Knight". The 1st single ""Love Aint a Prize"" Debuted at NUMBER ONE on the ITunes Country New Releases Charts and became the highest ranking single in 2016 for an independent artist on the prestigious "Music Row" charts hitting # 32 in Sept 2016

His work as a film and television composer, songwriter and producer has been heard on NBC, ABC, Discovery Channel, HBO, MTV and many others. He has also worked closely with various directors and producers to write and produce opening and closing credit "theme" songs for various films.

Jim has worked with a wide variety of acts and artists across the musical genres of rock, country, pop, blues , R&B and indie alternative.

Some highlights of Jim's career include:

Producer, Co-writer and Guitarist on the "Cant Buy a Southern Girl" EP for Alabama's own "Donica Knight"

Producer and co-writer on 2 songs with 2012 Grammy nominated artist Holly Brook AKA "Skylar Grey" from her debut album.

Co-writer with Joe Bonamassa on his # 1 Billboard record "Sloe Gin" on the song "Dirt in My Pocket".  "Dirt" is also featured as both the opening and closing song of the documentary "Rock Prophecies" based on the life of Famed Rock photographer "Robert Knight" www.rockprophecies.com

Co writer with Sony artist "Edwin" on his multiplatinum and chart topping song "And You" from the album "Another Spin Around the Sun"
Producer, co-writer on the track "Shine" featured on NBC's "Extreme Home Makeover"