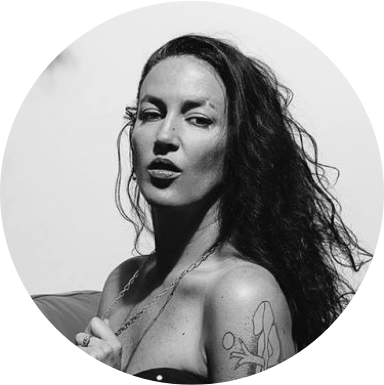 Kinnie Starr is one of Canada's most critically acclaimed underground musicians, a tri-lingual published author and poet, and an edgy visual artist. She creates both distinctive, beat-slamming hip hop/soul/folk recordings and hauntingly beautiful tapestries of sound. Starr is a Juno Award Winning Producer (2010, Digging Roots "We Are") and Juno Nominated Artist (2004, "Sun Again").

A self-trained interdisciplinary musician, Starr relies on "raw feral talent" (Globe and Mail), solid groove, and a love for wordplay whether performing folky hip-hop, heartfelt guitar songs or spoken word. Starr's songs have been featured in The L-Word and Thirteen, television and media ads, and in Fashion Television Canada and Le Chateau national play lists. She has worked with numerous talented artists including Tegan and Sara and Nelly Furtado, both of whom have acknowledged her as a key influence in their artistry.

MC, singer, musician, producer, songwriter, poet, author, actor, artist and human, Starr has toured the globe extensively throughout her career and been celebrated and recognized for some of her many achievements; in 2011 she was crowned "Pioneer in Hip Hop" at Toronto's Manifesto Hip Hop Summit alongside legendary hip hop icon, Michie Mee, and in 2008, the Royal British Museum in Victoria, Canada formally recognized her as one of BC's cultural icons.