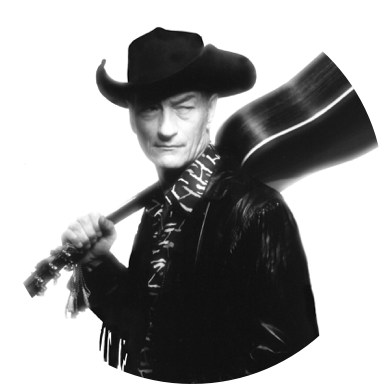 An imagination taller than the Rocky Mountains. A wanderlust that has taken him further than a Northern Ontario bush pilot. A guitar, a pair of boots, and a knack for writing songs about Canada can only begin to describe the man that Canada has come to know and love as Stompin' Tom Connors.

Born in Saint John, New Brunswick, Tom's youngest years were spent living hand-to-mouth with his mother, until he was taken from her and placed in the care of the Children's Aid. From there, he was adopted into the Aylward family of Skinner's Pond, PEI, where he lived until he began his hitchhiking career at the age of 15.

Tom traveled to almost every corner of Canada throughout the next 13 years - from the rocky coastline of Newfoundland to the arctic desolation of the Yukon - and a hundred thousand points in between. He could rarely be found without his guitar; even when he had a "real" job (which never lasted long), he would still write and sing songs about the people he met and the places he visited.

Money was a scarcity for Tom during this period in the 1950's and early 1960's; it may also have been his big "break", when he found himself a nickel short of a beer at the Maple Leaf Hotel in Timmins, Ontario. The bartender, Gaet Lepine, agreed to give Tom a beer if he would play a few songs. These few songs turned into a 13-month contract to play at the hotel, a weekly spot on the CKGB radio station in Timmins, eight 45-RPM recordings, and the end of the beginning for Tom Connors.

Tom's recording career picked up in 1969 when he signed with Dominion Records; over the next two years, he released 6 original albums, a compilation album, and a 5-album set of traditional music. He subsequently left Dominion Records to help form Boot Records - a company that would see 10 more original albums by Tom and a myriad of recordings from many other Canadian artists.

The album "Gumboot Cloggeroo", released in 1979, would be Tom's last. In a fit of frustration and disappointment, Tom returned all six of his Juno Awards, as a statement of protest against the Americanization of the Canadian music industry. This began Tom's self-imposed exile from the music industry - a music industry that would not embrace his homespun and fiercely patriotic brand of music.

Tom has never been a quitter; his dogged persistence and spirit to succeed rose in 1986 with his formation of A-C-T Records - a new label that would record and promote Canadian music. Tom began touring and releasing records again in 1988, and his signing with EMI Canada would eventually allow for the complete re-release of his entire catalogue of music. Tom would also receive the Order of Canada, an Honourary Doctorate of Laws from St. Thomas University, the key to the city of Peterborough, Ontario, and countless other honors.

To date, Tom has put out 20 albums of original material, several children's books, an autobiography (with a second-one coming), a movie, a television series, and countless memories for the Canadians that he has touched with his verses of Canada.