KULYK’S SELF-TITLED DEBUT ALBUM IS CURRENTLY IN THE RUNNING FOR THE 2020 CCMA AWARD FOR ‘ROOTS ALBUM OF THE YEAR’ “Kalsey has this singularity, this innocence, that I started to feel this spirit that I don’t think I’d heard since Stevie Nicks” – Richard Dashut, Producer (Fleetwood Mac) Toronto, ON (August 13, 2020) – Award-winning […] 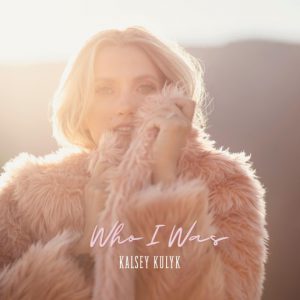 “Kalsey has this singularity, this innocence, that I started to feel this spirit that I don't think I'd heard since Stevie Nicks” - Richard Dashut, Producer (Fleetwood Mac)

Toronto, ON (August 13, 2020) - Award-winning country artist and 2020 CCMA Award nominee Kalsey Kulyk is set to deliver her new single “Who I Was”, available everywhere via Anthem Records/Anthem Entertainment. The insightful and introspective single, co-written with Jeff Trott (Sheryl Crow, Hootie & The Blowfish) offers a glimpse into Kulyk’s private world, and follows the 2019 release of her self-titled debut album, which has garnered over one million streams globally and was recently nominated for the CCMA Award for Roots Album of the Year.

STREAM/DOWNLOAD “Who I Was” HERE

“’Who I Was’ is a very personal song for me,” says Kulyk. “Throughout my life, I’ve found there have been people who have wanted me to be someone else or have tried to make me something I’m not, and I’ve occasionally gotten caught up in trying to be that other person for them. But sooner or later I realize that that someone isn’t me, and I always come back to myself. I hope this song speaks to anyone out there trying to be someone they’re not. The most beautiful thing about you is that there’s no one else like you. Be that person; that’s what makes you amazing!”

Previously featured in Billboard, Refinery29, Taste of Country and more, Kulyk is no stranger to the spotlight. As a teenager, the Saskatchewan-born artist became acquainted with Fleetwood Mac producer Richard Dashut, who invited her to Las Vegas to record. “We’d write songs, talk about performances, we even pulled a band together and did some shows on the Vegas strip. He literally trained my ears.” It was also Dashut who gave Kulyk her first taste of Music City. “We did a cross-country road trip to Nashville to take some meetings. There’s such a creative blanket over Nashville – it’s everywhere. It’s such an inspiring place to be.”

Her progress in Music City didn’t go unnoticed. Kulyk was invited to participate in the CCMA Discovery program and ole’s “On the Spot” competition, both of which she won, earning her a publishing and record deal and launching even more memorable moments, including the opportunity to write her song “Damn You Love” with Liz Rose (Taylor Swift’s “You Belong With Me,” Carrie Underwood’s “Cry Pretty”) and Phil Barton (Lee Brice’s “Woman Like You,” Eli Young Band’s “Skin and Bones”).

With an insatiable creative drive, Kulyk has continued to create and deliver new music while in quarantine. She recently released three acoustic covers including hit tracks “Bad Guy" (Billie Eilish), “Dreams" (Fleetwood Mac) and “Look At Her Now" (Selena Gomez) and has also earned herself a spot as a semi-finalist in the 2020 SiriusXM Top of the Country competition in partnership with the CCMA, vying for the grand prize of $25,000.