OUT TODAY AVAILABLE ON ALL DIGITAL AND STREAMING SERVICES WATCH LYRIC VIDEO HERE Milestone celebration marks the history and culture of Old San Juan, the oldest city in the United States. Today Anthem Entertainment, one of the world’s leading independent music and entertainment content and services companies, announced the release of José Feliciano’s rendition of […]

OUT TODAY AVAILABLE ON ALL DIGITAL AND STREAMING SERVICES 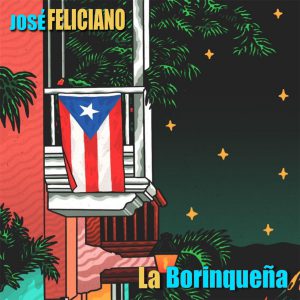 Milestone celebration marks the history and culture of Old San Juan, the oldest city in the United States.

Today Anthem Entertainment, one of the world’s leading independent music and entertainment content and services companies, announced the release of José Feliciano’s rendition of the official anthem of the Commonwealth of Puerto Rico, La Boriqueña. The release is timed to the 500th year celebration of San Juan, Puerto Rico, marking the five centuries since the city’s revolution against Spain.

“It was important for me to record “LaBorinqueña” in celebration of the 500thAnniversary of San Juan, Puerto Rico,” said Feliciano.  “She has been through so much. I am looking forward to returning home on May 15th to the Centro de Bellas Artes where I will be able to share my music with my people.  Mi Isla, Puerto Rico. La Borinqueña, how I love you!”

“José’s lifelong love affair with his homeland is felt throughout this new recording,” said Anthem CEO Helen Murphy.  “Despite his global success and his continued popularity with young audiences, José never misses an opportunity to celebrate the beauty and spirit of the land where he was born and to go back and help the people of Puerto Rico who so badly need our support throughout their hardships.”

Twenty percent of Anthem Records proceeds from this recording will be donated to the Flamboyan Arts Fund, an initiative dedicated to preserving, amplifying, and sustaining the arts in Puerto Rico by supporting all facets of the arts community including music, theater, visual arts, dance, literature, and youth arts direction. The fund was established as a partnership between Lin-Manuel Miranda, his family, Jeffrey Seller (the producer of HAMILTON), and the Flamboyan Foundation.

This new rendition of La Boriqueña is available now across all digital and streaming platforms.  Fans can stream the song HERE.  Watch the official lyric video HERE.

ABOUT JOSÉ FELICIANO:
José Feliciano is a beloved singer/songwriter/guitarist and nine-time GRAMMY Award Winner, including a Lifetime Achievement Award for his contributions to music. The Puerto Rican-born artist is known for his many international hits, including his rendition of The Doors’ “Light My Fire”, “Che Sarà,” “La Copa Rota,” “Por Qué Te Tengo Que Olvidar?”, the theme song  “Chico and The Man” from the hit television show, and his rendition of “California Dreamin’” which was featured in Quentin Tarantino’s acclaimed film, Once Upon A Time In Hollywood, and went on to be one of the most streamed tracks from its soundtrack.

Feliciano’s “Feliz Navidad” is the #1 bilingual holiday song worldwide and one of the best-selling holiday songs of all time.  The evergreen carol was originally recorded with Jose’s producer, Rick Jarrard, in October 1970 and released one month later in November 1970 on RCA Records. Forbes declared “Feliz Navidad” as the ‘gift that keeps on giving’ which rang true again in 2020 when it reached #6 on the Billboard Hot 100 chart.

Jose’s most recent album, Behind This Guitar, on Anthem Records and also produced by Rick Jarrard, joins his 60-plus albums in an incredible discography, solidifying José’s revered standing with critics and fans alike. The Miami Herald noted songs such as “I’m America” “fits Feliciano as well as any of the hundreds of songs he has recorded”; Guitar Player raved the album “is an energetic and soulful eight-song set,” Billboard commented on its “authentic melodies,” and People Magazine aptly stated in an extensive feature, “once again, he’s in the midst of a resurgence.”