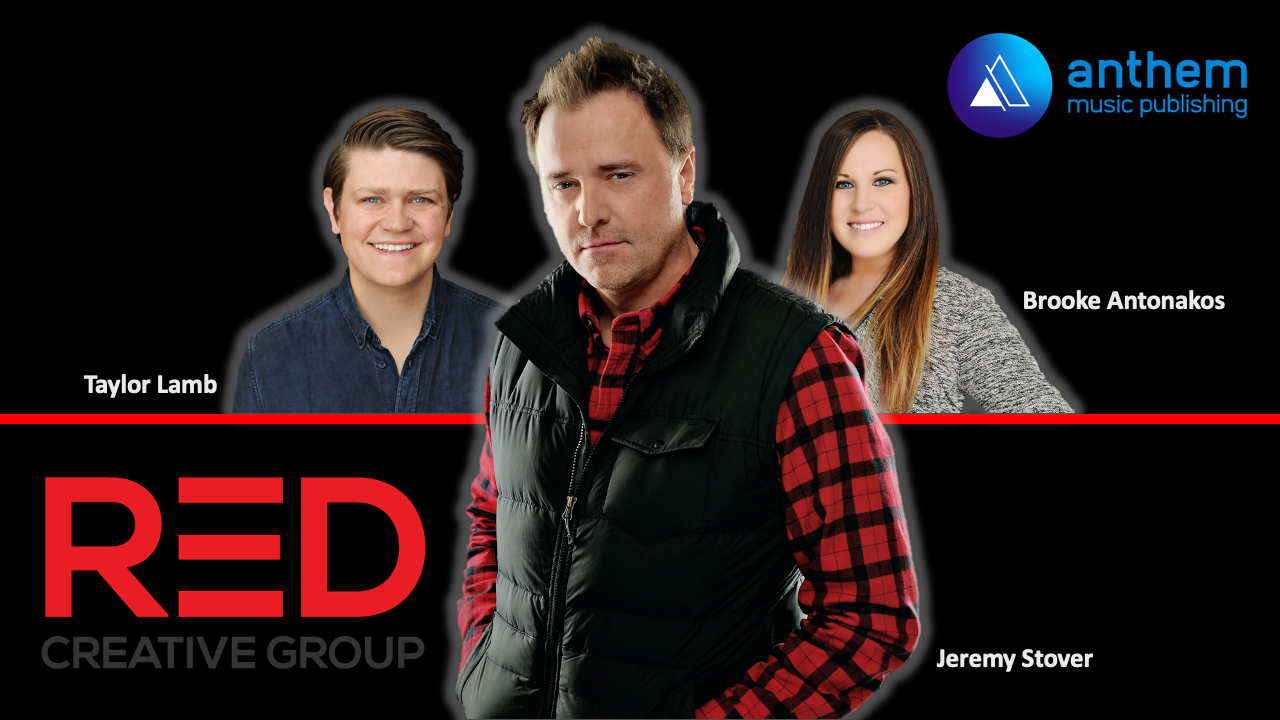 12 MAY 2020 (NASHVILLE, TN) – Anthem Entertainment, one of the world’s leading independent music and entertainment content and services companies, is pleased to announce the extension and expansion of their worldwide co-publishing deal with songwriter/producer Jeremy Stover and RED Creative Group. The deal renews and expands the successful relationship between Anthem Music Publishing and […]

12 MAY 2020 (NASHVILLE, TN) – Anthem Entertainment, one of the world's leading independent music and entertainment content and services companies, is pleased to announce the extension and expansion of their worldwide co-publishing deal with songwriter/producer Jeremy Stover and RED Creative Group.

The deal renews and expands the successful relationship between Anthem Music Publishing and Jeremy Stover. It includes Stover’s publishing interest in compositions written by the roster of songwriters under his RED Creative Group. The catalog comprises a number of chart-topping songs including “How Not To” performed by Dan + Shay, “Somebody Else Will”, “The Ones That Didn’t Make it Back Home”, and “Why We Drink” performed by Justin Moore”, “To a T” performed by Ryan Hurd, and “How I’ll Always Be” performed by Tim McGraw.

Jeremy Stover, Owner, RED Creative Group states: "Anthem shares the same creative spirit that we value so deeply at RED. Their drive and determination to elevate, while carving their own unique path in Entertainment, makes them the perfect partner for RED's future endeavors."

Helen Murphy, CEO, Anthem Entertainment said: “Jeremy is an incredibly talented creative in his own right and he is passionate and fierce in his support of artists and songwriters. I am thrilled to expand our relationship with him and his skilled roster of songwriters.”

Tim Wipperman, President of Anthem Music Publishing Nashville, added: “When a music publisher has the rare opportunity to work with a writer and entrepreneur of Jeremy’s quality, it raises the bar for everyone. We’re excited to continue working with Jeremy and the RED Creative team.”

About Anthem Music Publishing:
Anthem Music Publishing works with new and established songwriters and composers to create hit songs, nurture their talent by creating co-writes and other collaborations, as well as seeking opportunities for their songs and catalogs to be placed with recording artists, TV & film, video games and advertisements. A division of Anthem Entertainment, one of the world’s leading independent music and entertainment content and services companies, Anthem Music Publishing has offices in Nashville, Toronto and LA. With an extensive global collection network, Anthem collaborates across label, creative, sync & licensing, digital services and administration teams to develop, monetize and protect songwriters, composers, film & television clients and catalogs. For a list of Anthem Music Publishing’s roster and more information, visit anthementertainment.com/musicpublishing

About RED Creative Group:
RED Creative Group is a leading independent music publisher for artist, producer and songwriter development. Acclaimed producer/songwriter, Jeremy Stover, launched RED Creative Group in late 2014. Since inception RED has celebrated over 200 cuts and 25 singles on the country charts with such songs as “How Not To” by Dan + Shay, “Somebody Else Will“ by Justin Moore”, “How I’ll Always Be” by Tim McGraw, and “Sleep Without You” by Brett Young. RED’s office, in Nashville’s vibrant Berry Hill area, is a welcoming creative space for its roster that includes the talents of Travis Denning, Adam Hambrick, Jeremy Stover, Kelly Archer, Nathan Spicer, David Fanning, LJ, and Baker Grissom. RED Creative has established itself, not only as a successful independent music publisher, but also as a leader in the area of artist development, resulting in major label record deals for their artist/writers like Travis Denning and Adam Hambrick. For more information, visit redcreativegroup.com