January, 27, 2021 (NASHVILLE, TN) – Anthem Entertainment, one of the world’s leading independent music and entertainment content and services companies, is pleased to announce their worldwide publishing deal with hit songwriter, Jimmy Thow. Vancouver native Jimmy Thow is a singer/songwriter/producer and one half of the two-time Canadian Country Music Association Awards nominated country […] 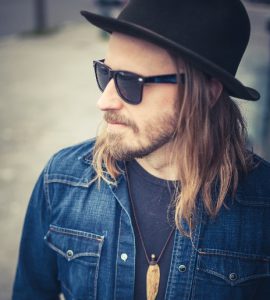 Vancouver native Jimmy Thow is a singer/songwriter/producer and one half of the two-time Canadian Country Music Association Awards nominated country duo Sons of Daughters. Residing in Nashville, Tennessee Jimmy has recently collaborated on four top 10 hits as a songwriter, one of which reached No. 2 on the Canadian Billboard Country Chart, “Good Jeans” by Tebey.

"I've been fortunate enough to get to know the Anthem Nashville team over the last few years and I couldn't be more excited to kick off the next chapter of my career by joining this incredible team,” shares Throw.'

“Jimmy Thow is an exceptionally talented country artist and songwriter with an established fan base as part of the successful country duo Sons of Daughters. We are thrilled to have him join the Anthem Entertainment family and continue our strong tradition of signing great Canadian singer/songwriters,” said Helen Murphy, CEO of Anthem Entertainment.

In addition to writing music with and for artists, Jimmy is a successful collaborator in the sync world where he writes and produces music for television and streaming services. He recently composed and produced the theme song “3” for the upcoming television series “The Knossos Project” currently in pre-production.

CCMA Rising Star nominees, and SiriusXM Top of the Country semi-finalists Sons of Daughters are a contemporary country duo (Chrystal Leigh and Jimmy Thow) hailing from Vancouver, Canada and now based in Nashville, Tennessee. Early in their career, Sons of Daughters performed at a private event for AC/DC, where Brian Johnson (lead singer of AC/DC) exclaimed, “Your voices together sound like you came from the same womb.”

Anthem Entertainment is comprised of a music publishing division, recorded music label, production music division, and a leading film and television audio-visual secondary rights (AVSR) management company. We support artists, create content, and provide entertainment services around the world. As technology and entertainment evolve, we work hard to create and maximize opportunities for our talent and our clients. Our difference: an approach that combines the resources, power and reach of a major with the agility, entrepreneurism and soul of an indie. Anthem Entertainment operates offices in New York, Los Angeles, London, Nashville, and Toronto.