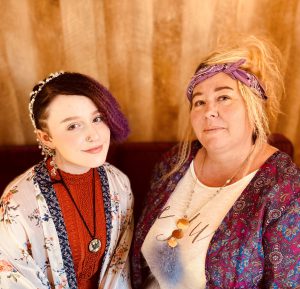 NASHVILLE (June 23, 2020) – Anthem Entertainment, one of the world's leading independent music and entertainment content and services companies, and Wrensong are pleased to announce an exclusive worldwide publishing deal with mother-daughter songwriters, EmiSunshine and Alisha Hamilton.

EmiSunshine and Alisha Hamilton are American singer/songwriters from Madisonville, Tennessee. EmiSunshine first captured the nation's attention in 2014 through her viral social media presence when she was just nine years old. Her performance of Jimmie Rodgers’ “Blue Yodel No. 6” was posted on YouTube and quickly became a viral hit with over 1 million views that gained attention from the Today Show (NBC) and Music Row. In 2017, Rolling Stone named her among “10 New Country Artists You Need To Know” and in 2018, she was featured in the Grammy-nominated Elvis Presley documentary “The King”. Emi was selected as the 2019 recipient of The ASCAP Foundation Desmond Child Anthem Award, which recognizes promising young musical artists.

EmiSunshine recently collaborated with Rock n’ Roll Hall of Fame member Bootsy Collins on a track called, “Stars.” Proceeds from streams and downloads of the song will benefit the MusiCares COVID-19 Relief Fund, which offers aid to help musicians and music industry members who have lost work due to the COVID-19 pandemic. Collins invited EmiSunshine, who has appeared on the Grand Ole Opry 14 times, to collaborate on the song after both artists were scheduled to appear in the Cincinnati Reds Opening Day Parade, which was later cancelled due to COVID-19.

On the signing, EmiSunshine said, “Being included with such a prestigious roster of writers is such a huge honor and I’m more than excited to be a part!”

Alisha Hamilton added, “Being accepted as a writer is all I ever dreamed of! I can’t imagine a better place to create new music.”

Ree Guyer, President and Owner of Wrensong Entertainment said, “Emi and her mom, Alisha, have been writing together since Emi was four years old. They are a magical writing team. Emi has a bright future as an artist/writer who is a storyteller to her peers and thinks outside the box. We are so pleased to be working with Emi and Alisha making their dreams come true.”

Tim Wipperman, President of Anthem Music Publishing Nashville: “Emi is an Artist/Writer brought into the family by Ree Guyer and our Wrensong J/V. She is an amazing young artist, and she and her mother Alisha have created a compelling body of music to propel that artistry forward. Look out world! Here they come..”

Anthem Music Publishing works with new and established songwriters and composers to create hit songs, nurture their talent by creating co-writes and other collaborations, as well as seeking opportunities for their songs and catalogs to be placed with recording artists, TV & film, video games and advertisements. A division of Anthem Entertainment, one of the world’s leading independent music and entertainment content and services companies, Anthem Music Publishing has offices in Nashville, Toronto and LA. With an extensive global collection network, Anthem collaborates across label, creative, sync & licensing, digital services and administration teams to develop, monetize and protect songwriters, composers, film & television clients and catalogs. For a list of Anthem Music Publishings roster and more information, visit anthementertainment.com/musicpublishing