GRAMMY AWARD-WINNING ICON SET TO PERFORM SOME OF HIS BIGGEST HITS AND CHRISTMAS CLASSICS WITH SPECIAL GUEST APPEARANCES  TICKETS ON SALE NOW AT smarturl.it/FN50Livestream NEW YORK [December 2, 2020] –Today, Anthem Records announced José Feliciano’s once in a lifetime, family-friendly Feliz Navidad 50th (FN50) Anniversary Livestream Concert. As part of their global celebration of the […] 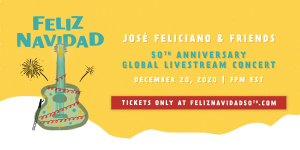 TICKETS ON SALE NOW AT smarturl.it/FN50Livestream

NEW YORK [December 2, 2020] –Today, Anthem Records announced José Feliciano’s once in a lifetime, family-friendly Feliz Navidad 50th (FN50) Anniversary Livestream Concert. As part of their global celebration of the 50th anniversary of José’s evergreen classic, José will be bringing Christmas joy through music to everyone around the world in the comfort of their homes on December 20, 2020, at 7 PM ET only at FelizNavidad50th.com.

Hosted by Grammy award-winning producer Rudy Perez, the concert will feature José Feliciano perform some of his biggest hits and Christmas classics, broadcast from his home state of Connecticut. Special guests joining José include Latin Grammy award-winning artist Andrés Cepeda, Rolling Stone Country’s “Artist You Need to Know" Austin Jenckes, soulful songstress Haley Reinhart, award-winning Country artist Kalsey Kulyk, and more. As a special bonus, the night kicks off with a pre-show, including host Lawrence Gowan (Styx), Eric Ethridge, Kalsey Kulyk, Meghan Patrick, and Stuck On Planet Earth from 7:00 PM to 7:15 PM ET. This will be one of the most memorable Christmas concerts for years to come!

“While I wish we all could be together in person, I’m so happy to be able to celebrate the holidays on the Feliz Navidad 50th (FN50) Anniversary Livestream Concert with my family and friends around the world,” said José Feliciano. “I’m thankful for the Anthem team who have come together to celebrate this humbling milestone of 50 years of ‘Feliz Navidad’. Merry Christmas and Happy Holidays everyone!”

On November 19, José, alongside his music label, Anthem Records, kicked off their global celebration campaign for the 50th Anniversary of Feliz Navidad with the release of a newly reimagined re-recording of the bilingual hit holiday song. Released as an Amazon Original, the song was produced by Grammy award-winning international producer Rudy Pérez and features José and 30 special guests from around the world. They remotely joined forces to create this special celebratory track of his timeless holiday classic to unify and spread holiday joy.

On December 1, Amazon released their Alexa campaign featuring José Feliciano. It’s the first Alexa campaign available in both Spanish and English. Amazon Alexa users can interact with José through Alexa by asking questions like, “Alexa, tell me about the song ‘Feliz Navidad’,” or “Alexa, what is José Feliciano’s favorite holiday memory?”

ABOUT “FELIZ NAVIDAD”
Written and performed by José Feliciano, “Feliz Navidad” is one of the best-selling holiday songs of all time. The evergreen song was originally recorded with producer Rick Jarrard in October 1970 and released one month later in November 1970 on RCA Records. Surprisingly, the song first hit the charts in 1998 on Billboard’s Hot 100, and then charted again in 2017, an astounding 47 years after its original release. After it landed on the Hot 100 again in 2019, Forbes declared it’s the “gift that keeps on giving.” ASCAP recognized “Feliz Navidad” as one of the top 25 most played and recorded Christmas songs worldwide. A seemingly endless list of artists across all genres has covered the iconic song, including Céline Dion, Garth Brooks, Chicago, The Three Tenors, Michael Bublé featuring Thalia, Gwen Stefani & Mon Laferte, Kacey Musgraves, and many more. “Without my friend Rick at my side, we might not have had ‘Feliz Navidad’,” said Feliciano.

ABOUT JOSÉ FELICIANO:
José Feliciano is a beloved singer/songwriter/guitarist and nine-time GRAMMY Award Winner, including a Lifetime Achievement Award for his contributions to music. The Puerto Rican-born artist is known for his many international hits, including his rendition of The Doors’ “Light My Fire,” “Che Sarà,” “La Copa Rota,” “Por Qué Te Tengo Que Olvidar?” the theme song, “Chico and The Man” from the hit television show, and his rendition of “California Dreamin” which was featured in Quentin Tarantino’s acclaimed film, Once Upon A Time In Hollywood and went on to be one of the most streamed tracks from its soundtrack.

José’s most recent album, Behind This Guitar released earlier this year on Anthem Records, joins his 60-plus albums in an incredible discography, solidifying José’s revered standing with critics and fans alike. The Miami Herald noted songs such as “I’m America” “fits Feliciano as well as any of the hundreds of songs he has recorded”; Guitar Player raved the album “is an energetic and soulful eight-song set,” Billboard commented on its “authentic melodies,” and People Magazine aptly stated in an extensive feature, “once again, he’s in the midst of a resurgence.” Take a listen to José’s full album here, watch the video for his version of Fleetwood Mac’s “The Chain” here and his patriotic love letter to the U.S. “I’m America” here.