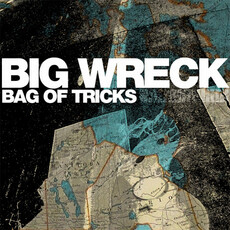 TORONTO, ON (August 13, 2021) – Anthem Records, the recorded music division of Anthem Entertainment, one of the world's leading independent music and entertainment content and services companies, today announced the first-ever releases of Big Wreck’s “Bag Of Tricks” EP on vinyl August 27.  The Canadian rock giants originally released the EP on June 25, 2013, as a digital only exclusive to iTunes Canada and most recently debuted a translucent turquoise vinyl with black marbling exclusively for Record Store Day Canada on July 17.

The August 27 vinyl releases of the “Bag Of Tricks” EP include a black variation and a limited edition translucent vinyl pressing that will be available exclusively through Big Wreck’s fan club.  The EP will also be available digitally everywhere for the first-time.

“It’s great to have this out on Vinyl,” said Ian Thornley. “A live album is probably the most common request we get, so knowing the fans will have a chance to hear these live recordings, is great.”

Captured live except for the studio-recorded cover of The Cars “Good Times Roll”, the vinyl releases include many of the songs from Big Wreck’s 2012 record “Albatross” along with the addition of a version of the 1997 hit “The Oaf (My Luck Is Wasted)” and “So Far So Good” from the Ian Thornley side-project officially known as Thornley.

Of the release Ian Thornley shares, “we just love playing live and put together a little bag of live treats for the fans recorded over the course of this great run with Albatross. I've always loved The Cars and threw our version of “Good Times Roll'' on as a bonus for our fans."

Founded in 1977, Anthem Records is a diverse and iconic record label representing some of the world’s biggest hitmakers. Home to an award-winning roster of critically acclaimed and commercially successful artists including Rock and Roll Hall of Fame inductees, Rush; country superstar Gord Bamford; legendary singer, songwriter and guitarist José Feliciano; alt-rock group Stuck On Planet Earth, and more, Anthem Records delivers a broad range of services to its roster including A&R, product development, marketing, promotion, sync & licensing, social & digital media strategy and more across multiple genres making it one of the most versatile labels in the world.

For a list of the full roster and more information, visit anthementertainment.com/anthemrecords.

Formed in in the mid-‘90s, Big Wreck remains one of the highest regarded rock bands in Canada, and music fans around the world know them as one of the most prolific groups on earth. With dozens of radio anthems, platinum albums, and millions of tickets sold, the band is excited to start releasing their seventh studio project later this year, being produced by Ian Thornley with Eric Ratz. There is a new energy in Big Wreck that hasn’t been seen before, and with new music on the horizon, the band is set to embark on the biggest chapter of their career.