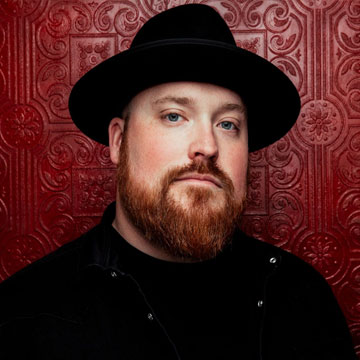 15 APRIL 2019 (TORONTO, ON) - Emerging country artist Austin Jenckes just released his latest track “Never Left Memphis” today off his forthcoming debut album If You Grew Up Like I Did, due May 31st via red dot. The loud, thumping track showcases a grittier side to Jenckes signature vocals and combines influences of rock, blues and the classic Southern soul sound.

“The Blues are in the roots of every type of music I grew up on, “Jenckes explains. “Memphis has a rich history of artists that shaped all genres. I have spent hours on YouTube trying to learn BB King licks and watching Elvis Presley bringing crowds to life with a stage presence that defined rock and roll. To me, there isn’t a better starting place to explain why I love music.”

The second new song revealed from If You Grew Up Like I Did (pre-order here), Jenckes recently released the lead track, “Fat Kid,” which features award-winning artist Lori McKenna who also co-wrote the song. McKenna is featured in the official “Fat Kid” video as well, which debuted on billboard.com and CMT, while being named a “Song You Need To Know” by Rolling Stone. Debuting on CMT’s 12-pack Countdown at No. 2, fans can vote for the video this week here.

Jenckes wrote or co-writing every song on the album, with the exception of “Fat Kid” written by McKenna, Neil Mason (The Cadillac Three) and the late Andrew Dorff. The album’s title, If You Grew Up Like I Did, comes from a lyric in the song.

Growing up in Duvall, Washington, a suburb of Seattle, Jenckes moved to Nashville six years ago to focus on being an artist and his songwriting. Since moving to Nashville, Jenckes started a family with his new wife. Previously named one of Rolling Stone Country’s “Artist You Need To Know" he’s performed alongside the likes of Brothers Osborne, Lee Brice, The Cadillac Three and Ashley McBryde, while also having recently performed the National Anthem at his hometown Seattle Seahawks Stadium in front of 65,000 people.

In December, Jenckes was awarded The ASCAP Foundation Harold Adamson Lyric Award in Country, an honor given to those who have demonstrated talent, musical intelligence and a dedication to future generations. He recently performed during ACM’s weekend in Vegas, including at Stoney’s to benefit ACM Lifting Lives.

ole is one of the world’s leading independent music and entertainment companies, comprised of a music publishing division, label group, production music libraries, and an audio-visual secondary rights (AVSR) management company. Founded in 2004, ole operates offices in Toronto, Nashville, New York, Los Angeles and London. ole’s music publishing division houses catalogs of more than 55,000 songs by over 400 songwriters, as well as 60,000 hours of film & television music. ole’s label group, including Anthem Records, supports, promotes and facilitates the success of artists at all stages of their careers. ole’s production music libraries, Jingle Punks, 5 Alarm Music and Cavendish Music, provide custom music services and over 800,000 tracks to creators of all media. ole’s AVSR company, Compact Media, manages the rights of more than 850 film & television producers and distributors around the world. As a trusted partner to some of the industry’s most successful artists, songwriters, publishers, and film & television producers, ole delivers the customized support, technology and infrastructure needed to navigate today’s complex global market.