JOSÉ’S LATEST ALBUM BEHIND THIS GUITAR OUT NOW 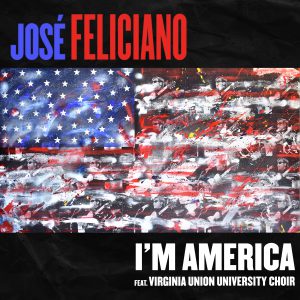 José Feliciano has shared his new music video and reimagined audio recording of “I’m America (feat. David Bratton & Virginia Union University Choir).” The original version of the inspirational track is featured on José’s latest album, Behind This Guitar, out now on Anthem Records/Anthem Entertainment. Stream/download the track here and watch the video here. The incomparable nine-time GRAMMY/Latin GRAMMY Lifetime Achievement recipient has reworked the moving song to include the soaring voices of David Bratton (Choir Director) and the Virginia Union University Choir, resulting in a stirring musical collaboration. Tune into Good Morning America to see José, his band (including his sons Jonnie Feliciano and Mikey Feliciano), and members of the choir performing “I’m America” on June 10.

José says, “’I’m America’ portrays something I feel in my life…a song about love and country.” Long-time producer Rick Jarrard almost “fell on the floor” when he first heard the song and knew it would be an ideal match for the blind Puerto Rican kid who grew up in New York and, against all odds, became an international star. “This is his story,” Jarrard says, “and so many immigrants.” Although recorded over a year ago in Nashville, José acknowledges the song has taken on new meaning as of late and comments, “I’m hopeful ‘I’m America’ can send a message of peace and unity to people everywhere during these turbulent times. The gift of music can be universal and healing when we most need it.”

Directed by Frank Licari and Helen Murphy, the music video opens with a nod to José’s stylized interpretation of “The Star-Spangled Banner” before Game 5 of the 1968 World Series, making him the first artist to put a contemporary, personal and multicultural stamp on the National Anthem. The video kicks off with José returning to Detroit to sing “The Star-Spangled Banner” once again for a Detroit Tigers game in 2018. He was met with exuberant cheers and thunderous gratitude, which drowned out the anger and bigotry of half a century earlier. The video goes on to highlight performance footage alongside landmark locations from around the U.S. and clips from 2019’s Puerto Rican Day Parade, where he was recognized with a Lifetime Achievement Award. The video was produced by Frank Licari, Mark Alan, Helen Murphy and Chris Price and was shot in Connecticut and New York City.

The cover art for “I’m America” was part of a commissioned mixed media piece painted by Alyse Stone, an American, multi-disciplinary visual artist and mechanical engineer. Entitled, “A World Honoring A Hero,” the piece marks the 50th Anniversary of Feliciano's controversial and historic performance of “The Star-Spangled Banner,” and debuted at the Detroit Tigers Stadium World Series Exhibition, followed by a feature at the Detroit Historical Museum.

Behind This Guitar joins 60+ albums in an incredible discography, solidifying José’s revered standing with critics and fans alike. The Miami Herald noted, “In 2020, ‘I’m America’ fits Feliciano as well as any of the hundreds of songs he has recorded,” Guitar Player raved, “Feliciano’s latest album, Behind This Guitar is an energetic and soulful eight-song set,” Billboard commented on its “authentic melodies,” and People Magazine aptly stated in an extensive feature, “Once again, he’s in the midst of a resurgence.” Take a listen to Jose’s full album here, and watch the video for his version of Fleetwood Mac’s “The Chain” here.

About Anthem Records
Anthem Records is a division of Anthem Entertainment, one of the world’s leading independent music and entertainment content and services companies. Founded in 1977, Anthem Records has evolved to include a diverse roster of artists across multiple genres. The company’s approach combines the resources, power and reach of a major label with the agility, entrepreneurism and soul of an independent. For complete roster and more information, visit anthementertainment.com/anthemrecords.