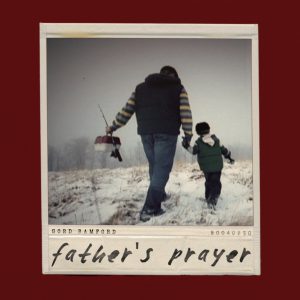 TORONTO, ON (June 19, 2020) – Just in time for Father’s Day weekend, multiple CCMA and CMA award-winning entertainer Gord Bamford today released the touching song and heartfelt accompanying live music video “Father’s Prayer” via Anthem Records. The timely new track is a sentimental tribute inspired in part by Bamford’s own relationship with his children Nash, Paisley and Memphis Bamford and the unconditional love and connection he shares with them.

“This song gives me chills every time I hear it,” shares Bamford. “As a father of three, it reminds me of the most important thing in my life and that’s getting to be a role model for my children - supporting and watching them grow as they chase their dreams and find their path. I hope everyone loves this song as much as I do and Happy Father’s Day to all.”

“When I first heard ‘Father’s Prayer’ it brought tears to my eyes,” shares Anthem Entertainment CEO, Helen Murphy. “It draws out all of the emotions that are felt by so many on Father’s Day when thinking about and celebrating their father figures and it captures the very essence of the day beautifully.”

With the support of presenting sponsors Kubota Canada and Peavey Industries, the special will raise money for The Gord Bamford Foundation and various youth-based charities across Canada. Since 2014, Bamford and the Gord Bamford Foundation have raised over $4,000,000 in support of multiple charities across Canada. With a passion for supporting youth-based programs, the Foundation provides funds for initiatives that include music, education, health care, sports and multi-use facilities that benefit youth across Canada. Viewers are encouraged to tune in and take action at GordBamfordFoundation.com.

ABOUT GORD BAMFORD: Australian-born and Alberta-raised, Gord Bamford stands as one of the most decorated artists in Canadian country music. He has received 26 Canadian Country Music Association awards including Album of the Year, Single of the Year and Male Artist of the Year wins, and multiple JUNO Award nominations. With over 75 million streams globally, Bamford is a two-time winner of the CMA Global Country Artist Award, with 25 Top 10 singles in Canada including the No. 1 hits “When Your Lips Are So Close” and “Dive Bar.” Bamford is the 2019-2020 recipient of the MusiCounts Inspired Minds Ambassador Award, presented by The Canadian Scholarship Trust Foundation. The award recognizes individuals who have had an extraordinary impact on music education and MusiCounts over the course of its history. Since 2014, Gord Bamford and the Gord Bamford Foundation have raised over $4M. In February (2020), Bamford received the 4H Canada Distinguished Alumni Award for his Charitable contributions. To date, Bamford has donated $200,000 to MusiCounts to support school music programs, the largest donation ever received from an artist in MusiCounts’ history. These donations provide instruments to children across Canada and give generations of students the opportunity to enjoy the incredible benefits of music in school. On June 19, Bamford will release his newest single, “Father’s Prayer” and will follow with his highly anticipated ninth studio album later this year.

ABOUTE ANTHEM RECORDS: Anthem Records was founded in 1977, with a rich history of artists including the legendary band Rush. A division of Anthem Entertainment, one of the world’s leading independent music and entertainment content and services companies, Anthem Records has evolved to include a diverse roster of artists across multiple genres. Our difference: an approach that combines the resources, power and reach of a major with the agility, entrepreneurism and soul of an independent. For a list of our full roster and more information, visit anthementertainment.com/anthemrecords