“JOSÉ FELICIANO: BEHIND THIS GUITAR” A DOCUMENTARY FILM – WORLDWIDE PREMIERE AT SXSW FILM FESTIVAL ON MARCH 18, 2020 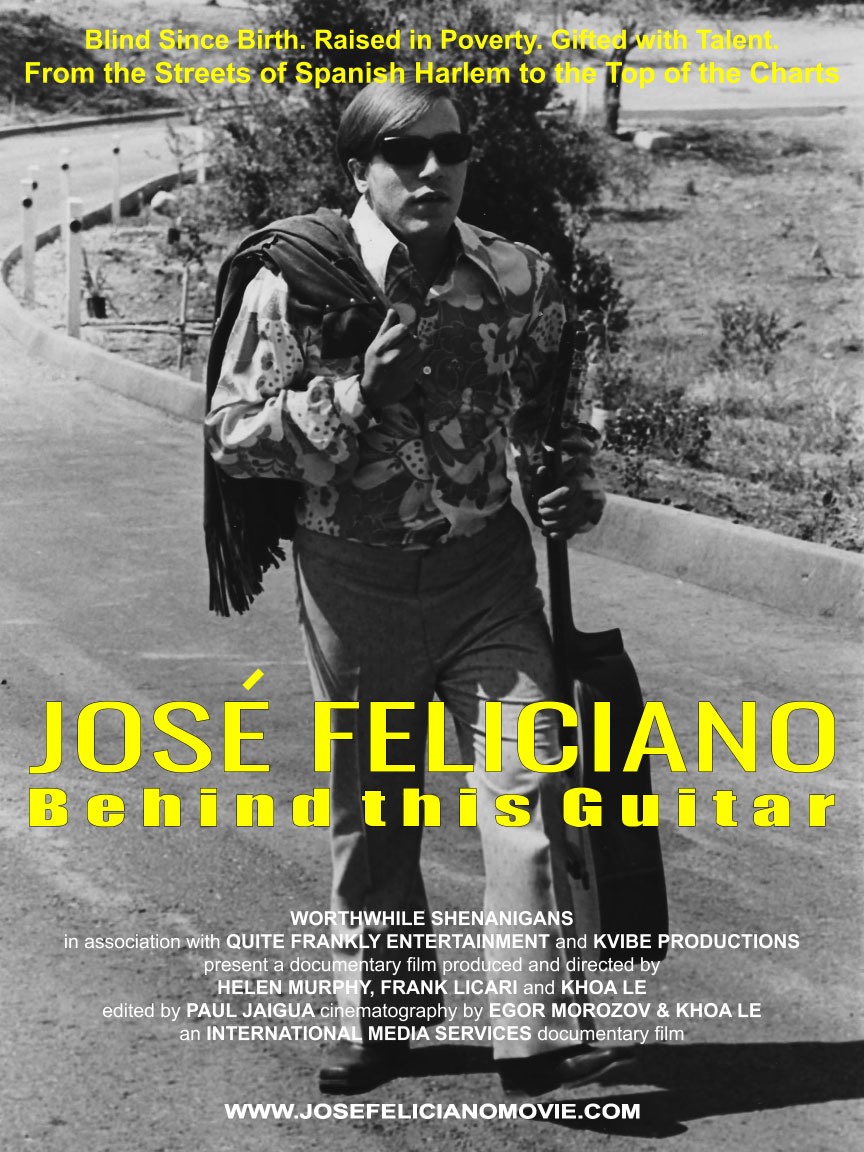 Worthwhile Shenanigans in association with Quite Frankly Entertainment, Kvibe Productions and International Media Services, announce the release of the documentary José Feliciano: Behind This Guitar, and its worldwide premiere at SXSW Film Festival on March 18th, 2020.  “José Feliciano: Behind This Guitar” chronicles the life and continuing career of nine-time GRAMMY and Latin GRAMMY Lifetime […]

Worthwhile Shenanigans in association with Quite Frankly Entertainment, Kvibe Productions and International Media Services, announce the release of the documentary José Feliciano: Behind This Guitar, and its worldwide premiere at SXSW Film Festival on March 18th, 2020.

“José Feliciano: Behind This Guitar” chronicles the life and continuing career of nine-time GRAMMY and Latin GRAMMY Lifetime Achievement recipient, singer/guitarist José Feliciano.  Revered as one the world's greatest guitarists, Feliciano is the first Latin American to win Best New Artist and Best Contemporary Pop Vocal GRAMMY Awards and is the first global Latin crossover artist. He is a pioneer in successfully blending genres as well as being a masterful musical interpreter.  His is the story of one of the greatest and arguably most under-rated superstar music artists of all time. His journey is a story about the quest of an American immigrant in pursuit of his dream to one day perform on the world stage.

The documentary traces José’s journey from birth, as a blind boy from the poor hills of Puerto Rico, to the slums of Spanish Harlem, to finding his way to performing in the clubs of Greenwich Village to the top of the worldwide pop charts. With his GRAMMY wins in 1968, José Feliciano opened the doors for all Latin artists to follow.

A trailblazer for artistic freedom, José Feliciano was the first artist to stylize and appear on the Billboard 100 Chart with the “Star-Spangled Banner.” At the height of his early popularity, his interpretation of the Anthem created a national controversy which prompted American radio to stop playing his records, nearly ending his career. The story depicts the remarkable resilience and obstacles that drove him to seek success outside of the country he loved, solidifying his status as a global superstar, and ultimately resulting in José’s international release of the song "Che Sará" a global hit in three different languages.

Gifted with perfect pitch and impeccable talent, he tackled the material of the Rock, R&B and Pop genres of the time and, repeatedly, his covers were embraced as passionately as the originals. From hits such as “Light My Fire” and “California Dreamin’” (also currently featured on the soundtrack of the Oscar-nominated film Once Upon A Time in Hollywood) to “Che Sará,” “Chico and the Man” and the world's most universal Christmas song, “Feliz Navidad,” José has created enduring hits throughout his 55-plus-year career. Beloved by fans everywhere, José continues to record and perform for audiences around the world.

The documentary includes interviews with superstars, Carlos Santana (10x Grammy winner), Gloria Estefan (7x Grammy winner), Emilio Estefan (19x Grammy winner), and Rudy Perez (Billboard Producer of the Decade, 1990) whose careers and lives were all influenced by José’s extraordinary guitar playing and distinctive voice. In addition, José’s legendary producers from RCA, Rick Jarrard (GRAMMY Nominated) and Jack Somer, recount what it took to convince the powers that be to sign a blind, Puerto Rican singer/guitarist and how they helped showcase his talents to the world.

José Feliciano said, "I am grateful for all the opportunities I have been given in my life. I hope that my story inspires others not to be deterred from pursuing their dreams due to adversity. If you work hard enough and strive to be your best, you can do it. I thank all of my fans around the world, as well as my family, for always being there for me, and a special thank you to all who’ve helped and inspired me with my music. God Bless America.”

José Feliciano: Behind This Guitar is directed and produced by first-time producer/director, Helen Murphy, a 30-year music and entertainment industry veteran and Frank Licari, an Emmy-nominated, award-winning actor, director, writer/producer (co-writer/producer of the feature film "Walt Before Mickey"). The film is executive produced by Murphy and Licari along with Khoa Le, CEO of Kvibe Productions (co-producer, and director of “Walt Before Mickey”). Kvibe Productions handled the production staffing and post-production for the film, with Paul Jaigua as lead editor and Egor Morozov, along with Le as Cinematographers.

Helen Murphy said, "José Feliciano is a national treasure and we felt a tremendous responsibility to tell his incredible story in a manner that reflected all of the challenges of the times that José experienced. This film should also serve as a reminder to music lovers and fans around the world of the incredible diversity of hit music that José has and continues to create.”

Frank Licari adds, “José has made a significant contribution to global music and our culture for over half a century. ‘José Feliciano: Behind This Guitar,’ depicts José’s humility and humor, as he continues to surprise and entertain us by producing extraordinary works. We are grateful that he entrusted us to bring his story to the big screen.”

The film was shot on location in Puerto Rico, California, Connecticut, Washington, Las Vegas, Miami and New York. It features the incredible music of Feliciano throughout, including some of his biggest hits such as “Light My Fire,” “Feliz Navidad,” “Che Sará,” “Let’s Find Each Other Tonight,” and “Lonely Teardrops.”   Also highlighted are new instrumentals from José, and two brand new songs from his recent studio album Behind This Guitar, just released on Anthem Records, including the title track and the heartfelt, 'I'm America.”  The album reunites José with longtime producer, Rick Jarrard, at a landmark moment in an enduring global concert and recording career now well into its sixth decade.