New Documentary “José Feliciano: Behind This Guitar” Premieres At The Nashville Film Festival October 1-7, 2020 Celebrating his 75th birthday today global icon José Feliciano is also commemorating the 50th Anniversary of his timeless holiday classic, “Feliz Navidad” with a series of notable events this fall. Kicking things off is the release of the new […]

Written by Helen Murphy CEO of José’s label Anthem Records/Anthem Entertainment, “José Feliciano’s Feliz Navidad, 50th Anniversary,” sees the beloved singer/guitarist as a musical superhero who travels the world on Christmas Eve in a flying red convertible, playing his guitar and singing “Feliz Navidad” for people of all ages. The pages come to life with bright colors and characters that span diverse nationalities, capturing the universal spirit of Christmas. The book features illustrations by Brandon Wei, design by Celia Fuller and is published by International Media Services, Inc. Available both in English and Spanish (translations by Madeline Luksha, edited by Maire Nina Luis), the book is available in multiple formats including e-book and paperback, with hard cover and large paperback to follow on October 28. All of the configurations will be released widely on December 5, 2020.

Helen Murphy commented, “José Feliciano is a national treasure. I was inspired to write this book to share the joy and celebrate the cultural impact that José's music, and ‘Feliz Navidad’ in particular, has had on the world. The song has an undeniable emotional effect every time it is heard. José Feliciano’s ability to persevere through adversity and continue creating hits decade after decade is nothing short of incredible”.

Also in October, a new documentary “José Feliciano: Behind This Guitar” makes its premiere at the Nashville Film Festival, taking place virtually from October 1-7, 2020. The film traces José’s journey from birth, as a blind boy from the very poor hills of Puerto Rico, to the slums of Spanish Harlem, to finding his way to performing in the clubs of Greenwich Village to the top of the worldwide pop charts. Carlos Santana, Gloria Estefan and Emilio Estefan all make appearances and speak to the impact Feliciano has had on popular music. The film is produced and directed by Helen Murphy and Frank Licari and co-directed and produced by Khoa Le. Alongside the film, “José Feliciano’s Feliz Navidad, 50th Anniversary” an animated short also makes its debut at the festival. Mirroring the book, the short has imagery of José flying through the sky in his convertible singing the classic song, with children from various locations following in anticipation of Christmas Day. For more information visit the Nashville Film Festival website here.

José Feliciano is a beloved singer/songwriter/guitarist and nine-time GRAMMY Award Winner, including a Lifetime Achievement Award for his contributions in music. The Puerto Rican-born artist is known for his many international hits, including his rendition of The Doors’ “Light My Fire,” “Che Sarà,”“La Copa Rota,” “Por Qué Te Tengo Que Olvidar?” the theme song, “Chico and The Man” from the hit television show and his rendition of “California Dreamin” which was featured in Quentin Tarantino’s acclaimed film, Once Upon A Time In Hollywood and went on to be one of the most streamed tracks from its soundtrack. Written and performed by José, “Feliz Navidad” is one of the best-selling holiday songs of all time. The infectious evergreen song was recorded with producer Rick Jarrard in October 1970 and released one month later in November 1970 on RCA Records. Surprisingly, the song first hit the charts in 1998 on Billboard’s Hot 100, and then charted again in 2017, an astounding 47 years after its original release. After it landed on the Hot 100 again in 2019, Forbes declared it’s the “gift that keeps on giving.” ASCAP recognized “Feliz Navidad” as one of the top 25 most played and recorded Christmas songs around the world. A seemingly endless list of artists across all genres has covered the iconic song, including Céline Dion, Garth Brooks, Chicago, The Three Tenors, Michael Bublé featuring Thalia, Gwen Stefani & Mon Laferte, Kacey Musgraves, and many more.

José’s most recent album, Behind This Guitar released earlier this year on Anthem Records, joins his 60-plus albums in an incredible discography, solidifying José’s revered standing with critics and fans alike. The Miami Herald noted songs such as “I’m America” “fits Feliciano as well as any of the hundreds of songs he has recorded”; Guitar Player raved the album “is an energetic and soulful eight-song set,” Billboard commented on its “authentic melodies,” and People Magazine aptly stated in an extensive feature, “once again, he’s in the midst of a resurgence.” Take a listen to Jose’s full album here, watch the video for his version of Fleetwood Mac’s “The Chain” here and his patriotic love letter to the U.S. “I’m America” here. 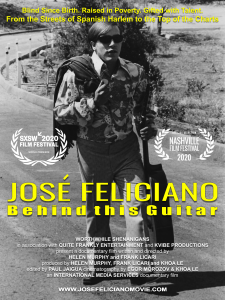