JUNO AWARD WINNING ARTIST GOWAN AND ALT-ROCKERS STUCK ON PLANET EARTH TEAM UP FOR THE NEW ORIGINAL HOLIDAY SONG “CAN YOU MAKE IT FEEL LIKE CHRISTMAS”, AVAILABLE EVERYWHERE NOW

WATCH THE LYRIC VIDEO HERE LISTEN HERE Toronto, ON (December 3, 2020) – “Can You Make It Feel Like Christmas”, a brand new track from JUNO Award winner Gowan and Toronto alt-rockers Stuck On Planet Earth is available tomorrow via Anthem Records/Anthem Entertainment. The festive holiday song, written by Gowan, is a timely offering in […] 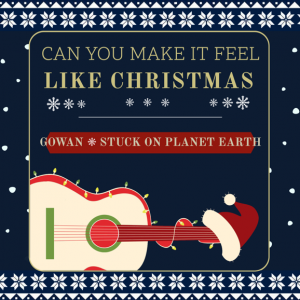 Toronto, ON (December 3, 2020) – “Can You Make It Feel Like Christmas”, a brand new track from JUNO Award winner Gowan and Toronto alt-rockers Stuck On Planet Earth is available tomorrow via Anthem Records/Anthem Entertainment. The festive holiday song, written by Gowan, is a timely offering in a year fraught with challenges, delivering a message of hope and strength throughout the season.

Of the song says Gowan, “With ‘Can You Make It Feel Like Christmas’, I wanted to capture the essence of the holiday spirit, while at the same time acknowledging the impact of 2020 and the fact that this will be a Christmas like no other. A song that expressed both the good vibes and cheer that people associate with this time of year, and the creative, resilient ways of making those feelings and traditions come to life despite the exceptional challenges. Recording this track with Stuck On Planet Earth was an absolute joy and along with their talents, they brought the perfect attitude and temperament to the song.”

Says Stuck On Planet Earth, ''It was our great pleasure to work with an artist as influential as Gowan. When we heard ‘Can You Make It Feel Like Christmas’, we immediately felt like it expressed the sentiment of how everyone is feeling in 2020 and we knew it was something we wanted to be a part of."

ABOUT GOWAN: Multi-Platinum, JUNO Award winning artist Lawrence Gowan has been delivering the hits for decades. Now a lead singer in the legendary rock band STYX; performing, writing and playing keyboards with the band since 1999, Gowan saw great success in his early days as a solo act, with the release of notable hits like “Moonlight Desires”, “Strange Animal”, “Dancing On My Ground” and the Platinum hit “A Criminal Mind”, all of which have received the prestigious Classic Status, joining the ranks of Neil Young, Bryan Adams and more

ABOUT STUCK ON PLANET EARTH: Since forming the band as teenagers, Stuck On Planet Earth have developed their sound over thousands of hours of playing together on stage and in the studio. Known for their primal, high-energy live shows and a signature mix of alternative rock and R&B, Stuck On Planet Earth delivered their debut album Beautiful Nowhere earlier this year, which includes their Top 40 single “Higher Than The Drugs” and current track “Ghosts On The Radio”. Having shared the stage with such notable acts as Scott Weiland & The Wildabouts, Finger Eleven, Weezer, and Motörhead , Stuck On Planet Earth were direct support for MOIST on their “Silver” 25th anniversary tour in 2019, and this past February the group performed a SOLD OUT show in their hometown of Toronto.