ole Receives Indie Publisher of the Year Award From AIMP 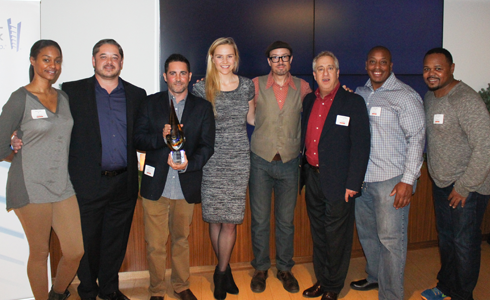 The Los Angeles chapter of the Association of Independent Music Publishers (AIMP) presented its prestigious Indie Publisher of the Year Award to ole, the world’s fastest-growing independent rights management company, at the AIMP LA Chapter Awards, Mixer & Benefit held on December 11th at BMI’s offices in Los Angeles. It was the first time that ole has received the award.

ole executive David Weitzman, Vice President of Business Development, accepted the award on behalf of the company. The honor comes as the company celebrates a 10th anniversary year that also saw its eighth straight CCMA Award for Music Publishing Company of the Year and unparalleled financial growth.

“It means a great deal to ole to be honored in this way by our colleagues in the AIMP. Attending AIMP meetings in the earliest stages of my career was a necessary inspiration in continuing my personal journey, and I applaud their continued work on behalf of our community,” said Robert Ott, Chairman and CEO of ole. “ole’s successful ten-year journey has been very gratifying, but I am even more excited about our future. I share this recognition with our world-class staff and songwriters.”

“ole is pleased to be recognized for this prestigious award by such an important organization in our community, the AIMP,” said Weitzman. “We’re very pleased that the AIMP is recognizing ole’s achievement of ten successful years as an independent music publishing company. We’ve been supporting talent, other music publishers, and creators and have been a community player. Also, we’ve epitomized what it means to be independent right down to our trademarked ’majorly indie’ brand.”

“As President of the AIMP Board, we are honored to present our Publisher of the Year Award to ole,” said David Hirshland, President of the AIMP and Senior Vice President of Client Services at BMG Chrysalis. “ole has embodied the spirit of the independent publishing community since its founding in 2004. We congratulate them and wish Robert and his team continued success and a long future.”

The event, which was open to AIMP members only, celebrated the holiday season while raising money for charity.