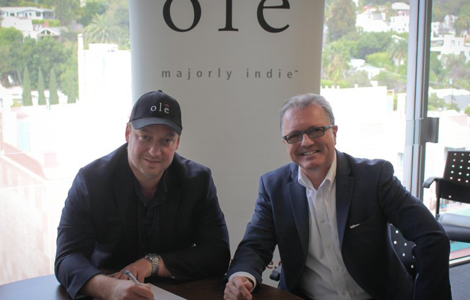 ole, the world's fastest growing independent rights management company, has signed a worldwide co-publishing and futures deal with the film and TV music company Jamerica LLC and its Founder, the Danish Music Director and Composer Jeppe Riddervold, who has served as Music Director for the popular LEGO children's cartoon series, including LEGO Ninjago: Masters of Spinjitzu, which was just nominated for the BAFTA 2015 Kid's Vote Award as well as earning Riddervold an International Animated Film Society Annie award nomination for best music in an animated TV series in 2015, and LEGO Elves. Under the agreement, ole will also become the exclusive administrator of Jamerica and Riddervold's digital A/V rights.

"Jeppe is an accomplished musician, composer, producer, and music director who is very successful in the world of animation and also brings business acumen to the table that has served him well on a global scale," said Gilles Godard, Vice President of Corporate Affairs and Development at ole. "ole looks forward to leveraging our world-class resources on his and Jamerica's behalf to create new opportunities internationally that will lead to even more exposure for their work."

"ole has done great things in the digital A/V space, and we're thrilled to work with them at Jamerica," said Riddervold. "Everyone at ole is incredibly knowledgeable about Film and TV music, and we're excited to see what new heights we can reach with their help."

In addition to LEGO Ninjago: Masters of Spinjitzu and LEGO Elves, Jamerica and Riddervold have also been involved with several other LEGO TV series, including LEGO Star Wars: The Yoda Chronicles, LEGO: Droid Tales, and LEGO: Lord of the Rings. Prior to founding Jamerica, Riddervold was first "discovered" by David Foster and Carol Bayer Sager's A&R team at Tonos when he was just 20 years old, which started his American songwriting career in Los Angeles in the late '90s. He eventually moved to Nashville and spent almost a decade there, co-writing with and for a number of talented songwriters and artists including Keith Urban, Lady Antebellum, John Paul White of The Civil Wars, Keifer and Shawna Thompson of Thompson Square, Rascal Flatts, Robin Lee Bruce, Cory Mayo, Jeff Spence, and Arlis Albritton as well as working with record labels Universal Music Group, EMI Music, Warner Music Group, EMI Nashville, Sony BMG Music Entertainment, and Chrysalis Nashville. He won the EMI Germany Songwriter of the Year Award in 2003 for the song "Survive," which was co-written by Bart Mendoza.