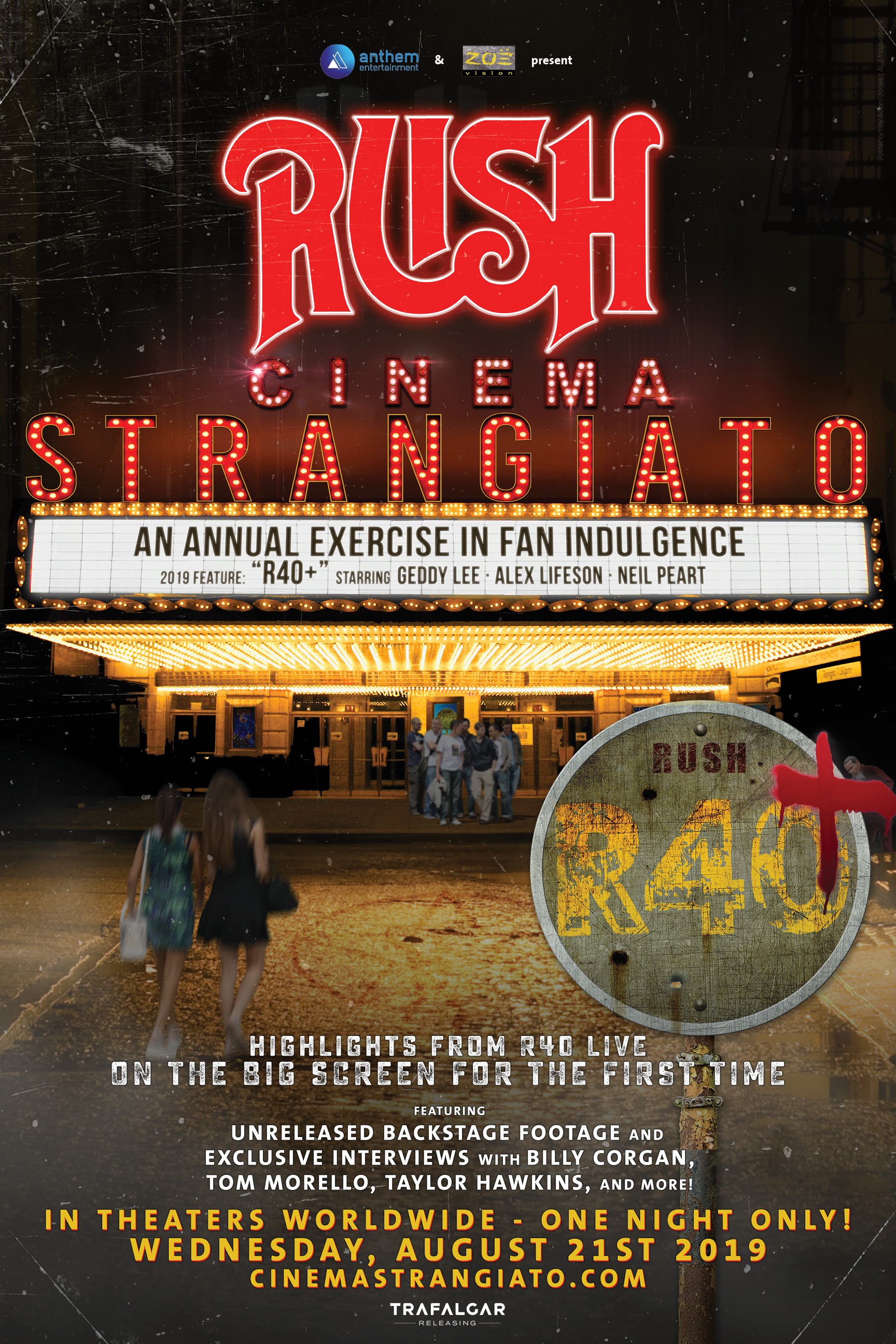 TICKETS ON SALE NOW AT WWW.CINEMASTRANGIATO.COM

20 JUNE 2019 - Global event distributor Trafalgar Releasing and Anthem Entertainment announce tickets are now on sale for RUSH: Cinema Strangiato 2019, coming to select cinemas across the globe, for a special, limited theatrical engagement on Wednesday, August 21. Hailed as an "Annual Exercise in Fan Indulgence" Cinema Strangiato is set to see the Holy Trinity of Rock return to the big screen bringing RUSH fans together in movie theatres worldwide.

In partnership with Concord, RUSH: Cinema Strangiato 2019 will feature a special look inside some of the most powerful performances from R40 LIVE, the band’s 2015 tour and live album of the same name.

As a special bonus, fans will get a glimpse into the madness and passion that went into the making of Geddy Lee's new book, Geddy Lee's Big Beautiful Book of Bass - featuring a brand-new interview from the RUSH frontman himself.

“I’m excited for fans to see some new clips from our R40 tour but also a peek behind the scenes
of making the Big Beautiful Book of Bass,” said Geddy Lee.

The news of RUSH: Cinema Strangiato 2019 follows other recently announced upcoming music releases from Trafalgar Releasing including The Cure: Anniversary 1978-2018 Live in Hyde Park London directed by longtime collaborator Tim Pope, the first worldwide outing for the ninth Grateful Dead Annual Meet-up at the Movies, hit Tribeca Film Festival music documentary Between Me and My Mind featuring Phish frontman Trey Anastasio, and the latest film from Roger Waters based on the US + THEM World Tour. Other recent music releases from Trafalgar Releasing have included The Music Center presents Joni 75: A Birthday Celebration, Coldplay: A Head Full of Dreams, Burn the Stage: the Movie, Muse Drones World Tour and Distant Sky: Nick Cave and The Bad Seeds Live in Copenhagen.

Kymberli Frueh, SVP for Acquisitions at Trafalgar Releasing added: "Trafalgar Releasing is thrilled to bring Rush: Cinema Strangiato 2019 to theaters around the globe for the first of what we’re hoping will become an annual event, bringing fans together to experience a celebration of one of the world's most popular rock bands."

The event will be screened in theaters around the world in over 400 cinemas on Wednesday, August 21. Fans can visit CinemaStrangiato.com for a full list of theater locations and to purchase tickets.

Trafalgar Releasing works with some of the world’s most renowned houses & companies; distributing high-profile arts content to cinemas worldwide from the Royal Shakespeare Company and the Royal Opera House. Additionally distributing in the UK, content from the Bolshoi Ballet, Glyndebourne and The Metropolitan Opera.

Since forming in 1968, Rush has become one of the world’s most-popular progressive rock bands. Between its debut album in 1974 and its final large-scale tour in 2015, the band has sold more than 40 million albums around the world, earning 24 gold, 14 platinum and three multi-platinum albums.

Anthem Entertainment is one of the world’s leading independent music and entertainment content and services companies. It is comprised of a music publishing division, recorded music label, production music division, and a leading film and television audio-visual secondary rights (AVSR) management company. Anthem Entertainment operates offices in New York, Los Angeles, London, Nashville, and Toronto with a team of approximately 200 dedicated industry professionals. We support artists, create content, and provide entertainment services around the world. As technology and entertainment evolve, we work hard to create and maximize opportunities for our talent and our clients. Our difference: an approach that combines the resources, power and reach of a major with the agility, entrepreneurism and soul of an indie.