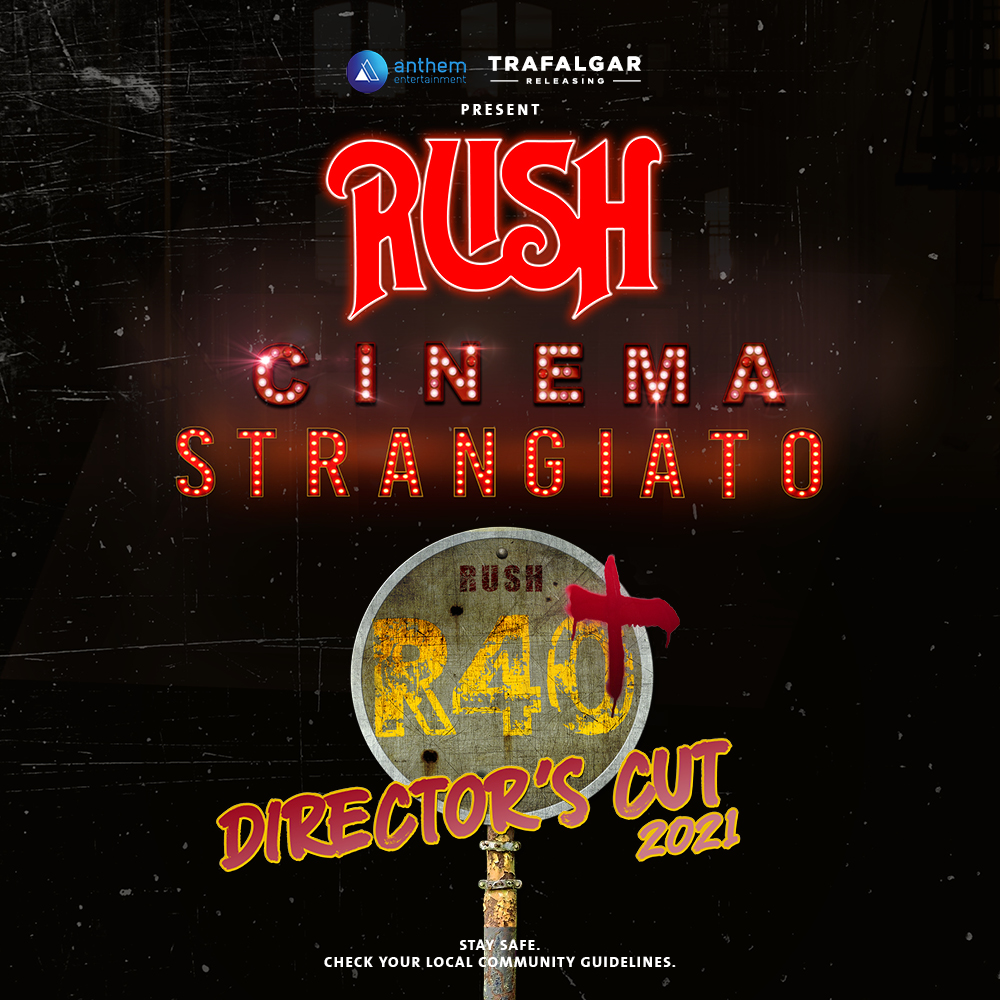 Trafalgar Releasing, Anthem Entertainment & Zoë Vision Bring the ‘Holy Trinity of Rock’ to the Big Screen for One Night Only on September 9 to Celebrate 40 Years of Moving Pictures

Tickets On Sale in Canada Beginning September 1 at cinemastrangiato.com

Public ticketing for Rush: Cinema Strangiato – Director’s Cut begins in Canada on September 1. Ticket on-sale dates may vary in additional countries, including the US, beginning on August 17. Visit www.cinemastrangiato.com for ticketing and the most up-to-date information regarding participating theaters. Stay safe. Check your local community guidelines.

“We are proud to once again bring Rush to big screens worldwide in celebration of 40 years of Moving Pictures,” said Kymberli Frueh, Trafalgar Releasing SVP of Content Acquisitions. “Rush has such a passionate following and we’re pleased to be able to share so many never-before-seen performances with fans through this new Director’s Cut of Cinema Strangiato.”

With more than 45 million records sold worldwide and countless sold-out tours, Rush - Geddy Lee, Alex Lifeson, and Neil Peart - is not only one of the most inventive and compelling groups in rock history, but remains one of the most popular. The RIAA® has certified Rush for the third most consecutive gold/platinum studio albums by a rock band, topped only by the Beatles and the Rolling Stones. Rush's vast catalogue includes such classics as 1974's self-titled debut, 1976's 2112, 1981's Moving Pictures, 1996's Test For Echo, and 2002's Vapor Trails. Rush released their 20th studio album, Clockwork Angels, in 2012. The critically-acclaimed collection marked their first studio recording since 2007's Snakes & Arrows, debuting at #1 in Canada and #2 on the Billboard 200, which matched the highest chart debut of the band's career. In addition to their commercial success, Rush has also been recognized with a number of JUNO Awards and multiple GRAMMY® nominations, including one for the acclaimed documentary Rush: Beyond The Lighted Stage and the Allan Waters Humanitarian Award. All three band members were made Officers of the Order of Canada in 1996, received the highest Canadian artistic honour by receiving the Governor General’s Performing Arts Award in 2012, and were inducted into the Rock and Roll Hall of Fame in 2013. Rush celebrated their 40th anniversary with their last large-scale tour, R40 Live, that visited 34 cities in North America in the summer of 2015. During that tour they recorded the two hometown shows in Toronto and later that year released the live audio/concert film, R40 Live, that debuted #1 on Billboard’s Top Rock Albums Chart.

Headquartered in London, the company also has offices in New York, Los Angeles, and Denver. More information about Trafalgar Releasing can be found at www.Trafalgar-Releasing.com.

ABOUT ANTHEM ENTERTAINMENT AND ANTHEM RECORDS: