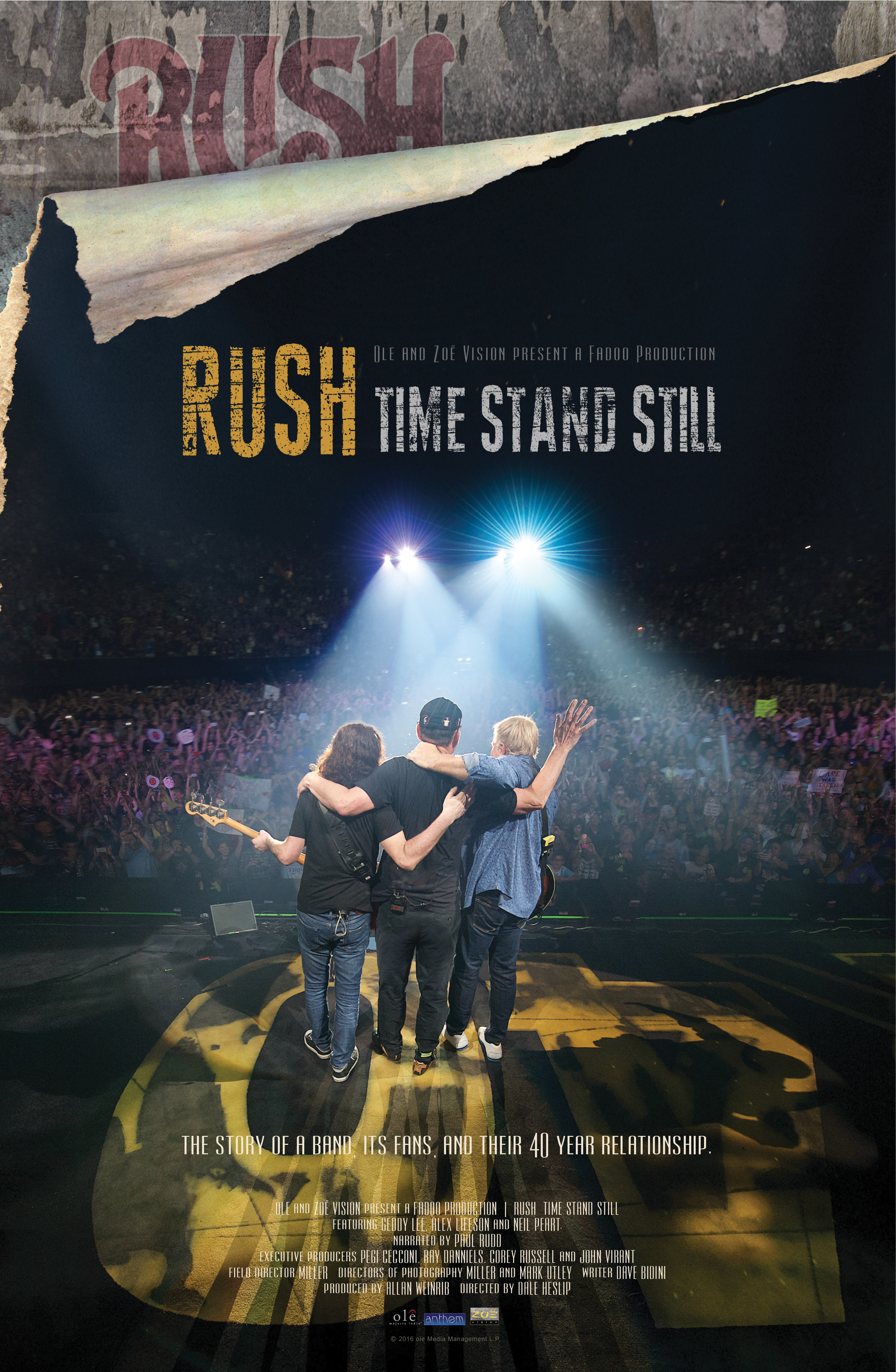 TORONTO, ON (October 5, 2016) – ole, in partnership with Cineplex Events and Landmark Theatres, is set to bring an epic cinema event with legendary Rock & Roll Hall of Famers, Rush, to fans nationwide with “Rush | Time Stand Still” starting on Thursday, November 3rd, 2016. This event, narrated by Paul Rudd, provides an intimate […]

TORONTO, ON (October 5, 2016) – ole, in partnership with Cineplex Events and Landmark Theatres, is set to bring an epic cinema event with legendary Rock & Roll Hall of Famers, Rush, to fans nationwide with “Rush | Time Stand Still” starting on Thursday, November 3rd, 2016. This event, narrated by Paul Rudd, provides an intimate look into the band’s sold-out and possibly final (“R40”) tour and the unique relationship Rush has with their devoted fans. With more than 40 million records sold worldwide and countless sold-out tours, Rush – Geddy Lee, Alex Lifeson, and Neil Peart – remains one of the most popular, inventive and influential groups in rock history, and this event is a night for their passionate and loyal fans to celebrate their storied career.

In addition to the documentary, fans will also view exclusive extras including Rush | A Salute to Kings – a 20-minute in-depth discussion with Gene Simmons (KISS), Chad Smith (Red Hot Chili Peppers), Taylor Hawkins (Foo Fighters), Ann & Nancy Wilson (Heart), Scott Gorham (Thin Lizzy) and the band’s producer Nick Raskulinecz, as they share their unique stories about Rush at home and away for over 40 years.

Fans who want to experience “Rush | Time Stand Still” can visit the official documentary website for a complete list of the 50+ Cineplex and Landmark theatre locations and to purchase tickets which go on sale starting Friday, October 7 (theatres and participants are subject to change).

“‘Rush | Time Stand Still’ is a love letter to Rush fans from all generations who made the band an important part of the cultural fabric of Canada and solidified their legacy,” said Brad LaDouceur, Vice President, Event Cinema, Cineplex Entertainment. “It’s great that fans can come together as a community to celebrate the band and their behind-the-scenes look at the R40 tour.”

In 2015, Rush went out for a 40th anniversary tour. At the time the R40 tour was rumoured to be their last tour – an end to Rush’s life on the road together. “Rush | Time Stand Still” follows this farewell journey. Exclusive behind-the-scenes access to the band and crew throughout the tour provide the raw and vivid emotional undertones of this feature-length film. At its core are Rush’s devoted fans, and their undying devotion and quirky sense of ownership are on full display as the R40 tour comes to a crescendo at the “Fabulous” Forum in Los Angeles. Personal stories highlight the importance Rush holds in their lives and the lasting impressions of their extensive catalog. For Rush, they are quick to acknowledge the role their fans have played in their success, which makes the reality that this might be the last so difficult. Candid interviews with Lee, Lifeson, and Peart bring “Rush | Time Stand Still” to an emotional conclusion for a band who built their career the old-fashioned way; one show at a time.